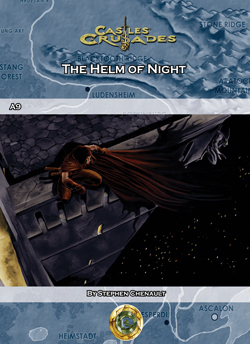 Castles & Crusades A9 The Helm of Night D

The Tower of Horesk is an ancient edifice built upon the edge of the Grausumlands. Its dark stones sit upon an island-anchorage in the midst of a deep morass of bogs, saw grass, and gray, stagnant water. The tower sits like an obelisk, rising from the fog and waters.

Adventure's road brings those stout of heart to the Tower's iron bound gate. Whether brought here by the trail of the Vessel of Souls or by pure happenstance, the Tower, perched upon the edge of nowhere, beckons, promising wealth and glory. But this is no abandoned dungeon. Fire-light spills from the windows that adorn its stark stones, and noise from inside carries over the still morass. Here is wealth and plunder, but danger as well, and those who would pry open its doors must approach with some caution, for inside lie ancient powers who reside upon the material planes to feed upon the weak and innocent.

Whether pursuing the Vessel of Souls as discovered in A8 The Forsaken Mountain, or coming upon the Tower through a regular adventure, A9 The Helm of Night offers characters plenty of adventure as they set out to explore, not an abandoned dungeon, but a tower filled with creatures most foul.