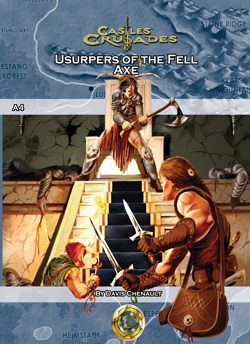 Castles & Crusades A4 Usurpers of the Fell Axe D

The town of Ludensheim has grown fat with wealth in the passing years and its citizens become accustomed to the spoilage and ease of life under their lord, Baron Dietbold the Fell Axe. But what brings this new found wealth that so satiates the citizens of Ludensheim while the lands about languish in squalor. Surely, say many, ill gotten gains and tainted wealth have flowed into the coffers of Baron Dietbold.

Called to seek out the source of Dietbold's wealth and power, one runs the gamut of greedy merchants, corrupt sheriffs, and the diabolical machinations of those who seek conquest of this land. More foulness is afoot in Ludensheim than in all the towns of the Hruesen combined and many a desperate battle will be fought before justice is served.

From the makers of the Castles & Crusades roleplaying game comes the fourth adventure for heroes of great renown in a war of intrigue and devilish doublecrossing.