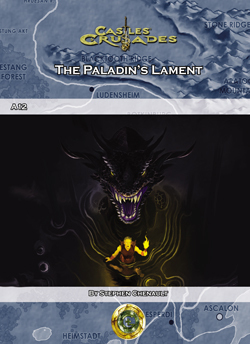 Castles & Crusades A12 The Paladin's Lament

These are the Gates of Hell.

Where the Wasting Way ends, the gates begin. Named the Ahargon Den, the Mouth of Darkness, the gates stand beneath the dark shadow of Aufstrag, offering entrance to the pits of hell on Aihrde. Herein lies another world, heaps piled upon heaps of dungeons, tunnels, halls, vaulted chambers of chain-bound madness, all steeped in the putrid morass of law and evil.

But, before taking the gates, one must pass a wilderness of dangers. The Outer Gate marks the end of the Causeway. It stands as a breach in a dike built to hold the surrounding swamps at bay, but one that now holds them penned into a fetid lake of stinking water and filth that laps the sides of that mighty fortress. Through this fetid morass,the Causeway dips, vanishing beneath the black water. From the waters, a ramp takes one to the Portico that lies before the gates, and the Kennel. Beyond the ramp lies the mirrored walk and the Portico, a broad porch, a quarter mile wide that played home to the many supplicants who came to Aufstrag for want of service, waiting for the Captain of the Gates to grant them entry. And over it all, the dread Tower of the Guard stands watch over the whole of the gate's environs.

The dangers lie beyond old buildings. A beast of foul design broke the bondage of Aufstrag and haunts the Fetid Morass within the Dike. The Ramp itself is scrawled with a graffiti of the mad. The gate house, though the dread Mogrl are long gone, houses a nameless shadow that hungers for a taste of a world past. Creatures crawl the tower above and horrors haunt the skies of this, the Paladin's Lament.

This adventure follows the adventures in the 'A' series developed by Troll Lord Games. The adventure can be used without reference to the previous adventures should the Castle Keeper desire.