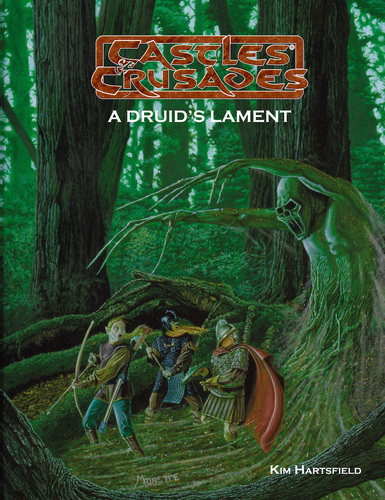 A few decades gone a young half-elf woman named Aspasia ventured into the the Minnimar. Born to her elven mother and raised among the fey folk, Aspasia had love and respect for the sylvan land. Her grandmother had lived in the Minnimar centuries before and Aspasia traveled here to reconnect with her ancestral home. So it was for a great while, and she lived in peace. She spoke to the wild like no other, and traveled with a stag who bore a crown of horns.

But in time, men came and they built homes as men do, and for their homes they cut trees. And they feasted as men do, and for their feasts they hunted the wild game. Thus it was that Aspasia found the men one eve feasting upon the Stag and she cursed them and she called on the forest gods to bring them death and ruin. And thus it was, for the wood's ancient powers rose to her druidic call, and her rage summoned ruin slew the men. But to her dismay the spirit remained, refusing her calls of banishment, so it was that the Minnimar became a cursed wood, for both fair and foul.

And the call goes out for stalwart adventurers, to bring relief from Minnimar's sufferance.