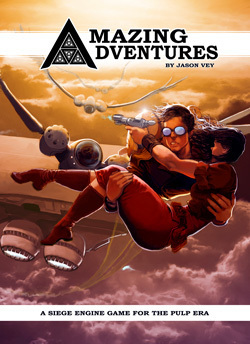 Amazing Adventures: The RPG of science, sorcery, pugilistic pummeling, gun-toting, sword-wielding, B17-flying, gadget carrying adventure! Whether your game is 1920's, 30's, 40's, 50's or modern, Amazing Adventures will get you there! Complete rules to create and run games, character creation, combat, secret societies, a rogue's gallery and an attribute check system that allows the game master and player to pummel any challenge to a pulp!

Entire multiverses of adventure and excitement await. Are you bold enough to sieze the reins?

Amazing Adventures is the SIEGE Engine multi-genre rules set that allows you to engage in any kind of adventure, in any genre or story style you like! 100% compatible with Castles & Crusades, this core rulebook contains everything you need to play in any world you like.

Alternately, combine it with C&C to take your fantasy game to the next level, with new character classes, alternate takes on magic, horror, super science, superpowers, and even full official psionics rules for the SIEGE Engine!

Within its pages you will find: