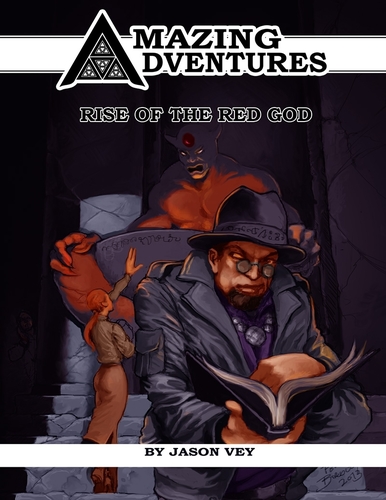 Tens of thousands of years before our time, in the mythic Thurian Age, the cult of the Red God, the Blood Imperator, spread across the world like a plague, its legions more powerful than the Aztecs and more cultured than the Mayans. Now, so many eons later, a temple has been unearthed deep in the jungle--a temple built by a lost civilization and dedicated to this long-forgotten god.

Is it possible that the Red God itself still sits at the heart of the temple, now decrepit, crumbling, and suffering from thousands of years of neglect? What secrets of ancient knowledge still reside within, undiscovered and little-touched by the millennia that have quietly passed it by? What treasures may still be hidden behind the stones and beneath the altars of the place? Perhaps even the very bible of the cult itself, an unprecedented find of historical significance! There's only one way to find out, and that's what you do best...